The Faces of American Patriotism

Interviews, Speakers, and Pictures from July 1, 2017 @ 154th Anniversary of the Battle of Gettysburg, Pennsylvania

Cynthia Rejoyce Lindsey – Preformed The Star-Spangled Banner “I wanted to be there to show my support for my country, her history, and President Trump.” 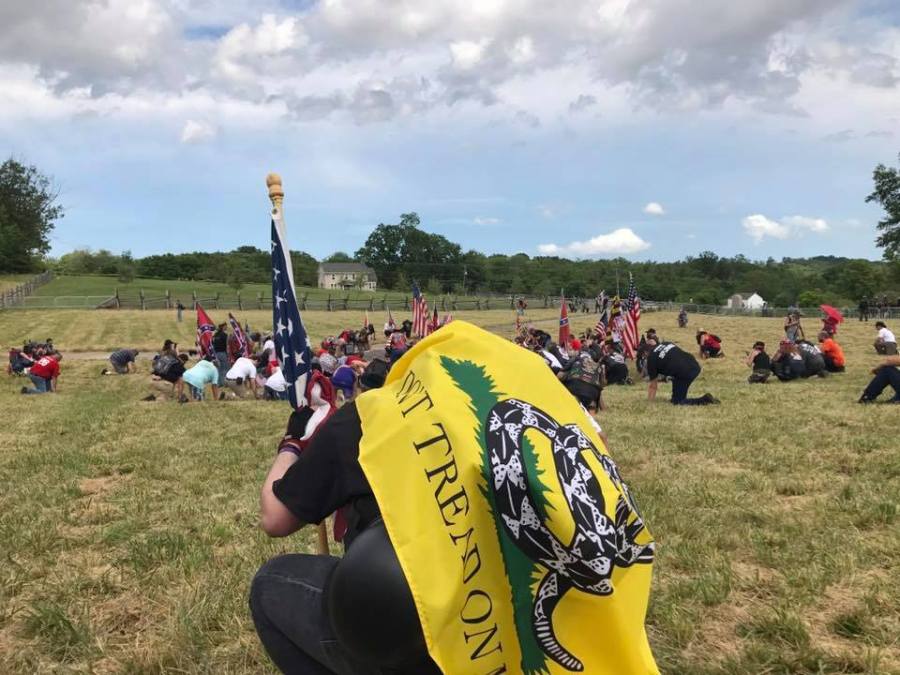 The Faces of American Patriotism

By: Amy Thomas – The Sunbury American/ Harrisburg100
Gettysburg National Military Park issued several special use permits for First Amendment activities. The Sons of Confederate Veterans Mechanized Cavalry and the Maryland Sons of Confederate Veterans merged their two events to the location north of Meade’s Headquarters near 160 Taneytown Road from 11 a.m. to 6 p.m.
There were more than 250 participants with both groups. Ted Feild and John Pickens, both of Pennsylvania, were with the Sons of Confederate Veterans Mechanized Cavalry along with Ski Bischof, of Allentown, who helped organize the events with a Facebook event called “Support America and Her History.”
Another group, Maryland Sons of Confederate Veterans, led by Raymond Rooks, consisted of about 20 people, marched in formation from the North Carolina Memorial to the Virginia Memorial, with small ceremonies along the way, from 10 a.m. to 1 p.m.
Gettysburg College professor Scott Hancock was issued a permit and staged a counter-protest against the Confederate Flag by himself.
Hancock, who has held similar protests in the past, said he was pleased to see the pro-Confederate Flag groups have less turnout than expected. He said he came by himself and didn’t publicize what he was doing to keep things from getting out of hand.
“The less support that groups that I consider to tell falsehoods about the past and the present, the less support the better,” Hancock said. “My guess was that it would be subdued because this seems to be the pattern. But in today’s political climate there’s always potential.” 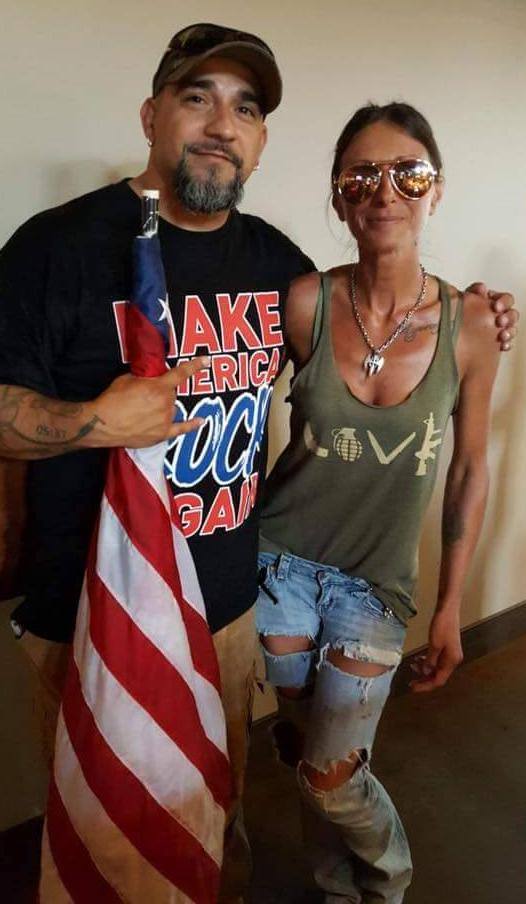 Tammy Lee – New York – NY STATE DIRECTOR FOR AMERICAN FREEDOM KEEPERS ‘Well for me being there I have many meanings. Besides the fact that I was there to help and assist in the protection of our history. I was also there to personally walk the history and see all the things that I have been reading about in books. For me I would have to say being a patriotic American is believing in your country and its values. Trying to love all of its people and sharing in a unity that keeps this country the greatest country in the world. Trying to remember that we have freedoms and we have a liberties that most don’t have. But being patriotic also means defending this country against all enemies which can be foreign and domestic. Preserving what made this country and preserving it for the future. We live in a day and age where everything is being attacked our history our liberties our rights and our freedoms and without people that are willing to stand up and risk everything to ensure that we keep those freedoms and liberties to me that is the basis of a true American patriot when you put your country before yourself I do sacrifice whatever needs to be sacrificed to preserve our country. My experience there the other day was very heavy and very overwhelming to be were so many people died so many people sacrifice the ultimate sacrifice so that we can move on and move forward and be free. Like so many other important places in this country they are taken for granted as far as what they represent now and it was just a very deep experience for me” 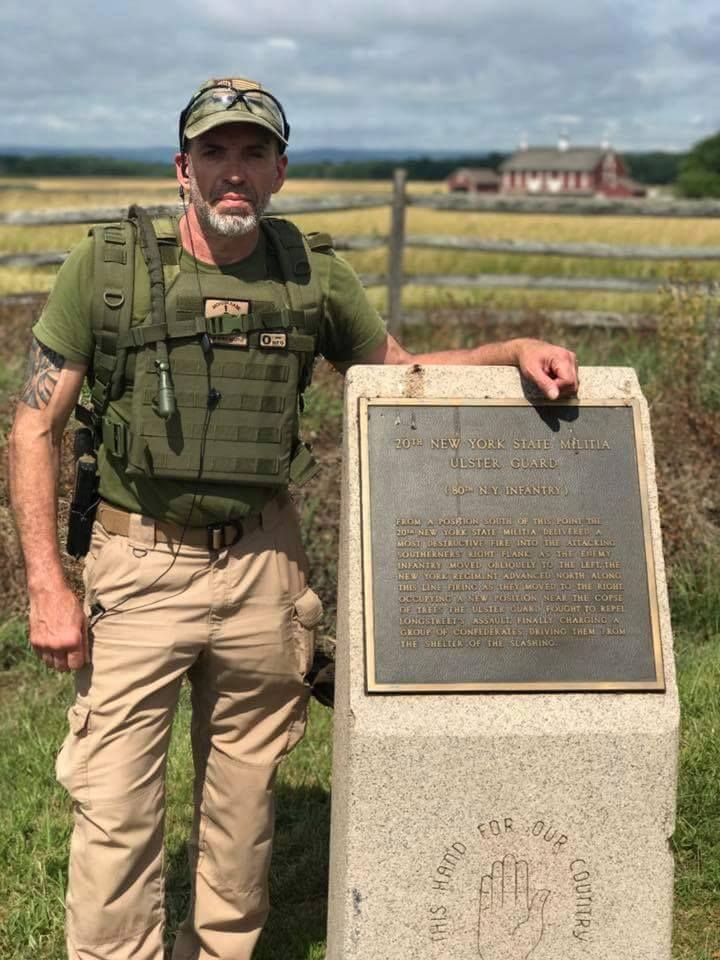 George Curbelo – State Commander New You Light Foot Militia & National Board Member “We were there because we believe in everyone’s right to protest but the threat of violence and the desecration of grave are not within our rights. Our coordination with law enforcement made it possible for all freedom loving Americans to enjoy honoring this sacred sight.” (New York Light Foot Militia -17 Members Attended Gettysburg) 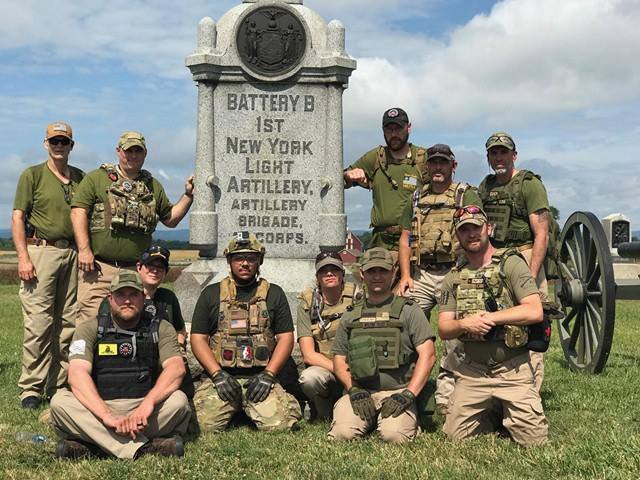 Rio Hiett – Vocalist/Frontman Madison Rising- Maryland “I am a combat veteran, Retired MSGT, USAF, AMMO and I love the USA. I respect the right to protest and march but I do not respect the tactics of the leftist groups. Destroying property, intimidation, and assault is not acceptable and should not be tolerated. I was there to represent Americas Most Patriotic rock band and my family. I believe we should stand up to these domestic terrorists, and their supporters. I am also willing to meet their level of aggression with a higher level. We, Patriots, must protect our way of life from all those that threaten it. So my feelings are this; protest and I respect it but cross the line, there will be consequences and repercussions.” 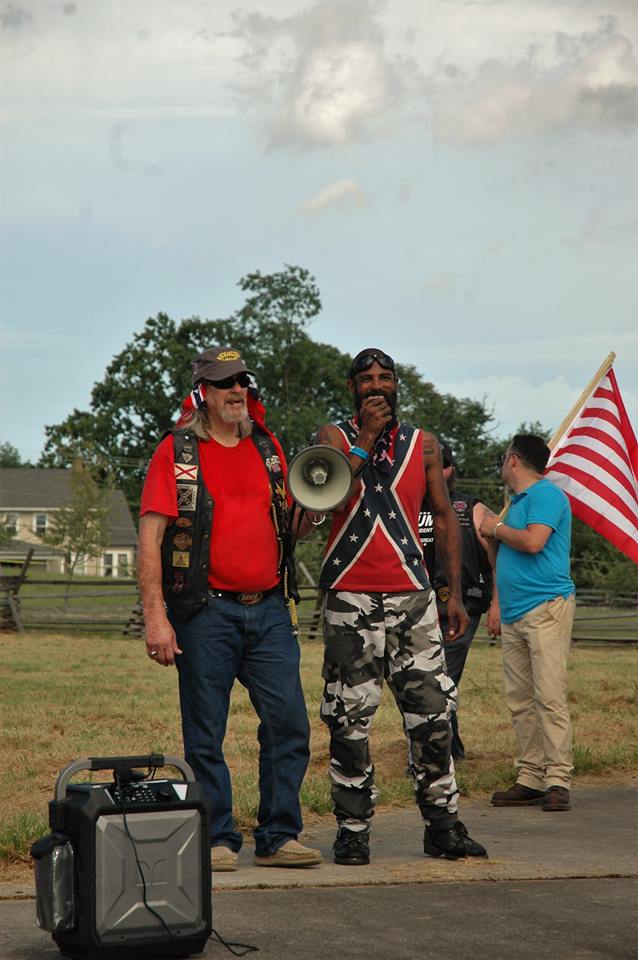 Alan Lee Beddingfield “My ancestors lived in South Carolina during the war and they were free people. They fought side by side. I see more racism in the North than I do in the South. I receive more racism from people of my own color. When I listen to Lynard Skynard they give me dirty looks. When I act a certain way the words “you act white” are repeated by those who are look at me with disgust as if I’m betraying my people. I grew up in the hood growing up I’ve seen four people get shot and someone stab right outside my house. When they want to kill each other and then nobody says word. Snitches get stitches. But then when a white cop or another person commits the same crime they want to scream and post it on Facebook. It’s about having what they want. Not about what’s right.”

Helena Rodriguez- Reading, attended with her husband Robert to show her patriotism. Rodriguez said she was born in Cuba but has lived in the United States since 1969. -I am an AMERICAN PATRIOT! I NEVER FELT ENTITLED TO ANYTHING! I IN THE OTHER HAND FELT BLESS & HONOR TO BE PART OF THE GREATEST NATION IN THE WORLD! This my Home Sweet Home, where i found the meaning of FREEDOM & BROTHERHOOD! GOD BLESS THE USA! 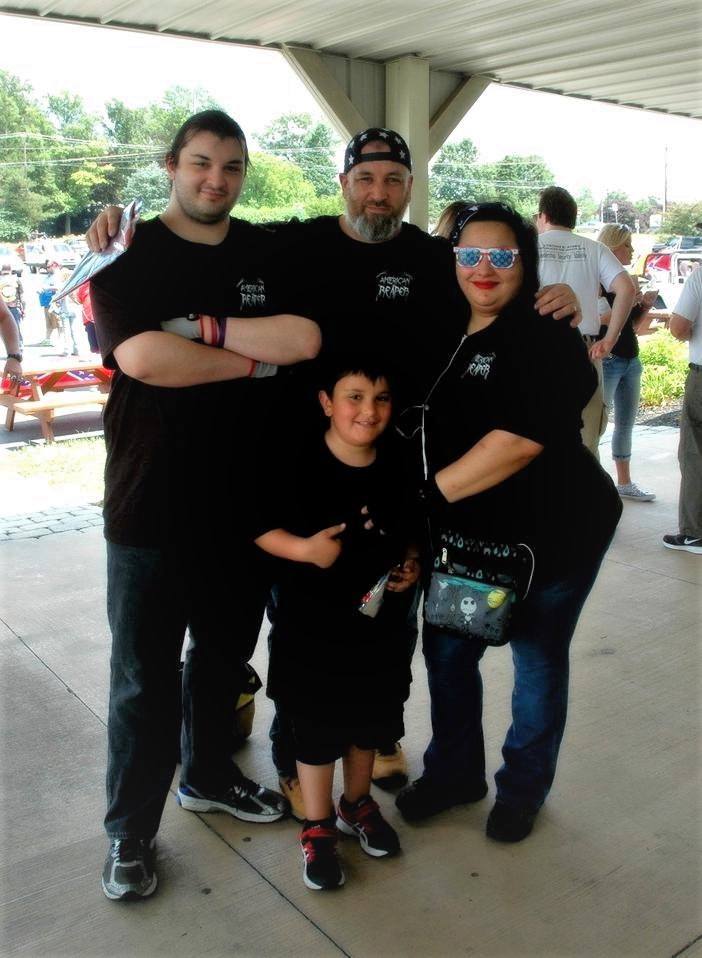 Bill Birster- Locust Gap- I am proud beyond words and I love that my son stood by my shoulder side by side and saw first hand what a true solidarity against these domestic terrorists. 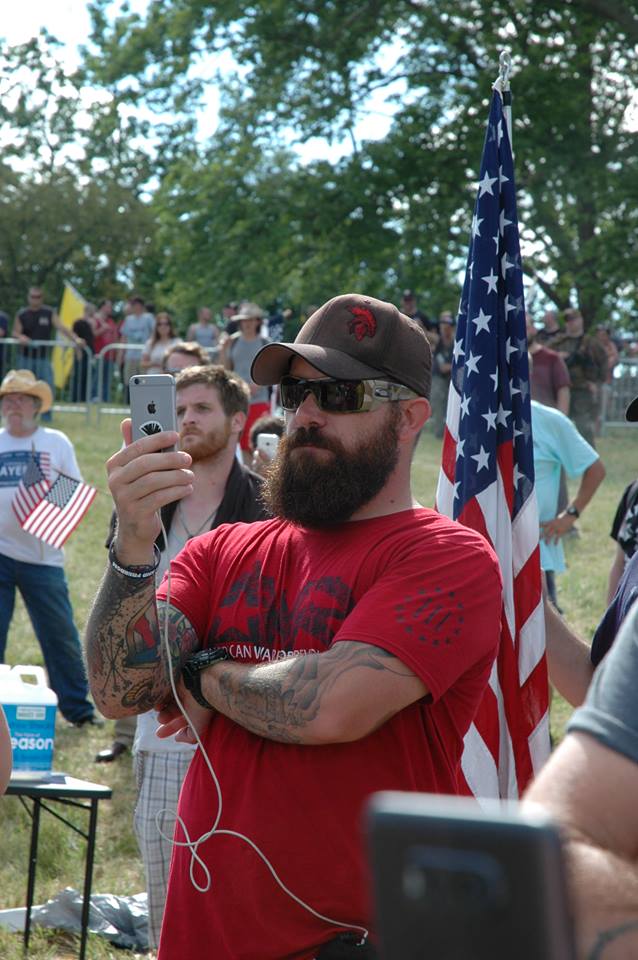 Jennifer Flavin –Lehigh Valley- Modern Patriots Pennsylvania Chapter “As an American and a supporter of our military men and women going to Gettysburg meant a lot to us. In no way were we going to allow them to destroy the history and the graves/headstones of our fellow American soldiers Doesn’t even matter what side they were on they were Americans not racist but Americans who fought and died for this country…and we honor them regardless what side cause we Patriots don’t see color, race, political background or religion …we see Americans” 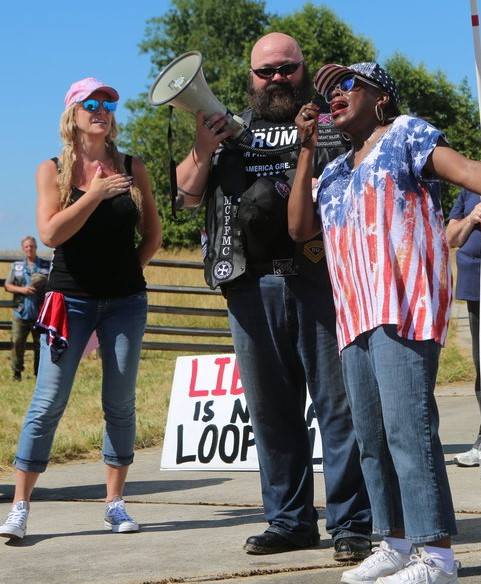 Cynthia Rejoyce Lindsey -Preformed The Star-Spangled Banner “I wanted to be there to show my support for my country, her history, and President Trump. I’ve been to a few outdoor rallies/marches, and each time, it was more (or equal number of) Antifa distrupters than were us patriots and Trump Supporters. I want to continually be part of a show of force and solidarity with my fellow conservatives as we fight this war of ideology and preserving history.” 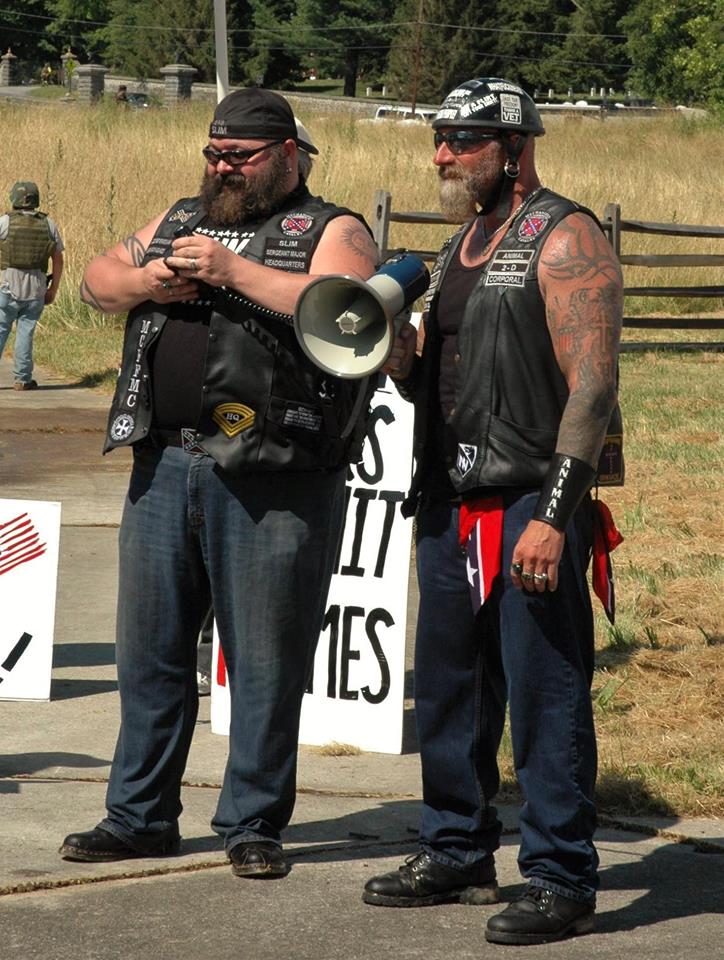 John Pickens National Sergeant Major of The Sons of Confederate Veterans, spoke of his family history and of his ancestors who fought in the American Civil War in both South Carolina and Gettysburg. “We had heard that the domestic terrorist organization as AntiFa were going to come out to this park and desecrate our ancestor’s graves, we all answered the call. Today is not about violence, it’s about teaching the person something because violence does nothing but create more violence at the same time can walk away learning something I would rather change their mind than change the direction of their teeth.

Ted Field – Sons of Confederate Veterans Mechanized Cavalry Permit Holder for Event “This event is too important not to be here. I think the movement today is going to send a clear message to AntiFA that we are not playing around and that if they are going to come to our National Parks and cause problems, we are going to be here to stop them” 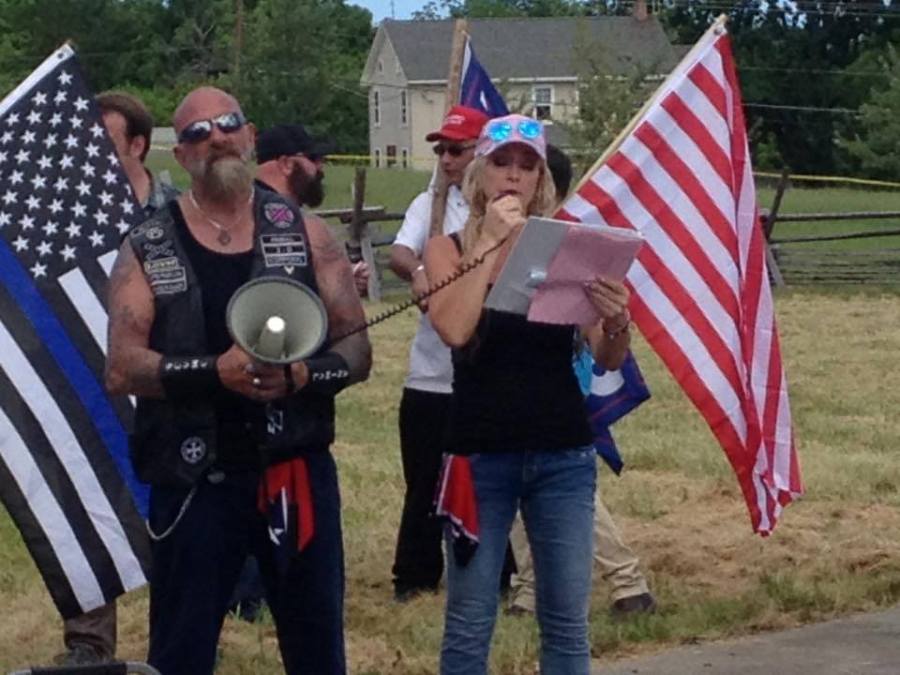 What we need to ask ourselves why would Americans take up arms against one another? The left say it was about slavery and that “the South was pissed because the North was going to take away their slaves”. That’s what they want you to believe. Does anybody in their right mind think that 50,000 men converged on one location to fight over slavery? All of us, ancestors of those people who fought and serve as a soldier, know the truth because we have been taught the truth handed down to us generation after generation and it is up to us to stand up and continue to speak the truth particularly when we are faced with such blatant lies. The Civil War was not fought over slavery…The Civil War was caused due to the aggression of the north. and the African slaves that fought with the Confederate Army were for the most part all free men, where as the African slaves fighting for the north were forced to fight for the union army. Because the North won the Civil war or as I like to call it, “The War of Northern Aggression”, history has been misrepresented and re-written to further their agenda and it is all to apparent, specially in today’s world. That agenda was as detrimental to all Americans as our ancestors said it was 154 years ago. 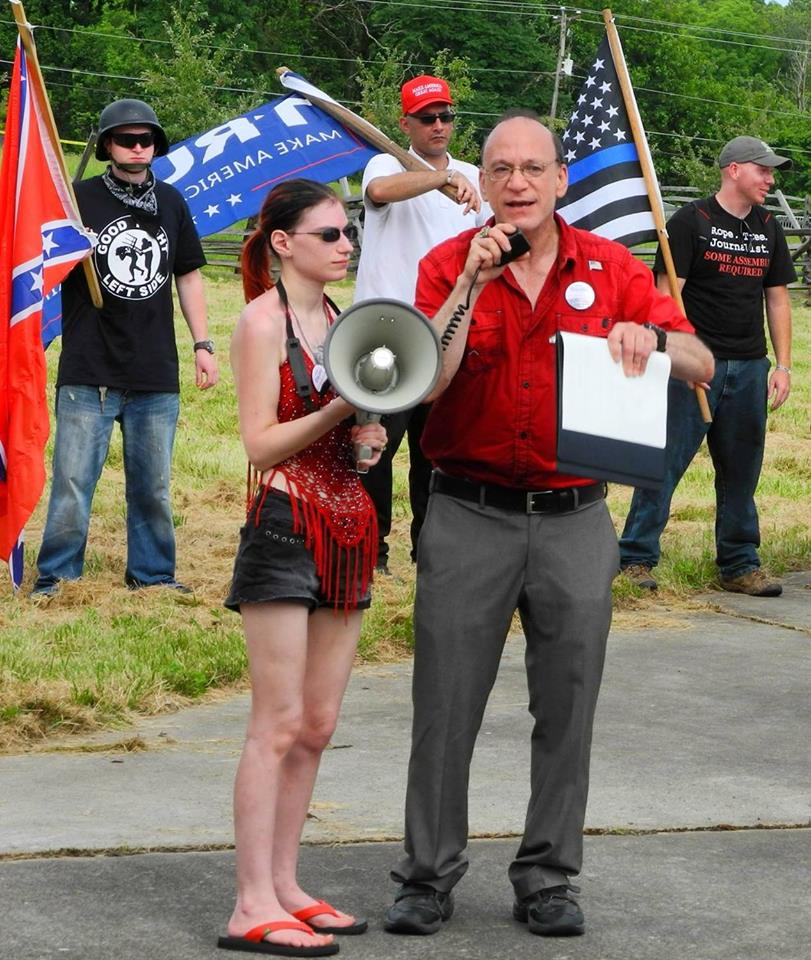 Andrew Shecktor- Berwick- US Senate 2018 Candidate “I stood beside you, I walked with in your marches while rocks and tear gas was being thrown. Tell me, what other politician today has had that has done that? NONE. Now I will stand behind you, before you and beside you in everything you stand for and will do so as long as I am alive and as long as I can. Today we stand on hallowed ground and beneath our very feet lies the blood of Patriotic soldiers of both the North and the South who fought for causes they both believed in and believed were just. We must never let the people who died on this Battleground to have died in vain.”

Pastor George Cook-Pennsylvania “We have here today come to honor the dead and their valiant actions.” He then went on to ask the audience to get on bended knee and place a hand on the ground. “I want you all to be connected, just for a moment, to the blood that was soaked into this very soil 154 years ago. On a day long ago, men wearing both blue and gray came here and here their life-blood was poured out’ 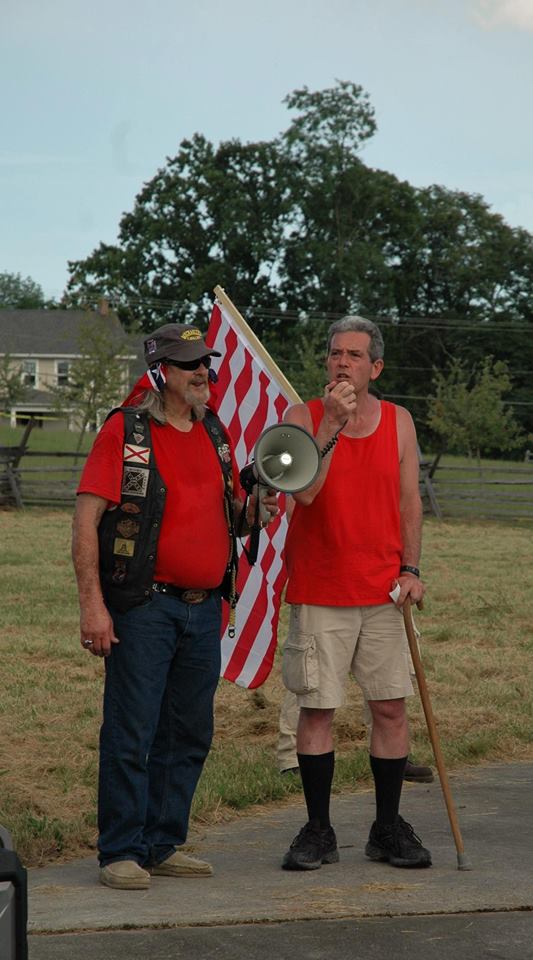 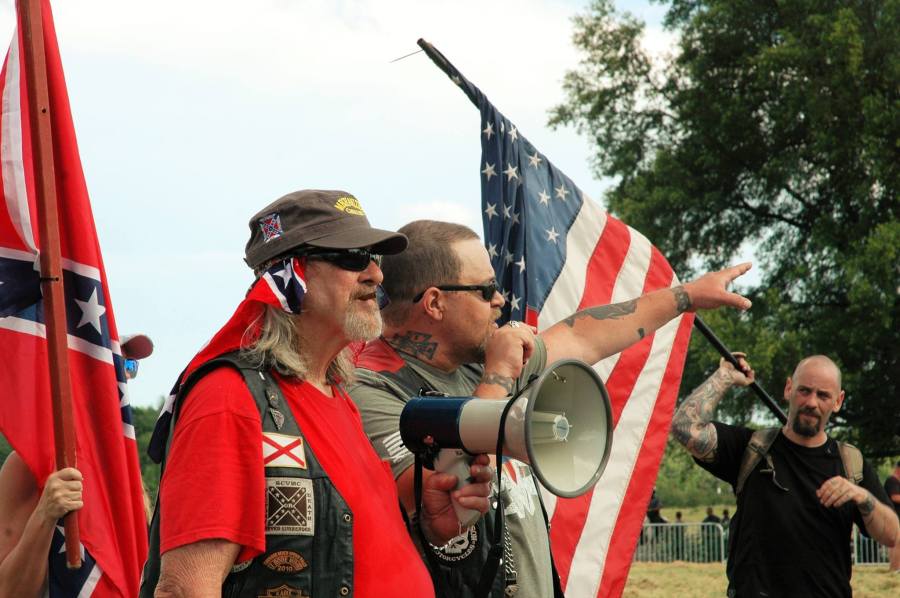