Upon news of the “America First XMas Bash,” the brew pub quickly became the target of a politically motivated smear campaign by angry callers, posing as concerned citizens, criticizing a scheduled speaker who chairs an alleged “extremist group.” The target of the protesters, guest speaker Enrique Tarrio, is a first-generation Afro-Cuban immigrant.

Upon news of the “America First XMas Bash,” the brew pub quickly became the target of a politically motivated smear campaign by angry callers, posing as concerned citizens, criticizing a scheduled speaker who chairs an alleged “extremist group.”

The cancellation comes after The York Dispatch last week published a smear campaign aimed at Enrique Tarrio, chairman of the Proud Boys, a high-profile speaker at the event. The organization is labeled a hate group by the Southern Poverty Law Center, a designation Tarrio disputes.

Tarrio, a first-generation Afro-Cuban immigrant, on Friday dismissed the center’s findings. He asserted “they have no official standing with anybody” and that labeling the organization as white nationalist is untrue and problematic.

The Proud Boys has made national headlines on more than one occasion over the years, often involving altercations with violent Antifa protesters.

Jeffries’ campaign has rescheduled the event at a different location, he said Monday. The new location will be released to registered guests, and the venue will have increased security.

Other speakers set to attend include Danielle Stella, who last month was banned from Twitter after suggesting U.S. Rep. Ilhan Omar, D-Minn., should be hanged if a conspiracy theory alleging she committed treason was true.

Stella is challenging Omar in 2020.

Jeffries first announced the “America First Xmas Bash” on Thursday, Dec. 5. His campaign sponsored the event along with the organizations Demand Free Speech and “Rally with Roger,” a pro-Roger Stone advocacy group.

The Proud Boys was created by Vice co-founder Gavin McInnes in 2016. The group has been accused of neo-fascist ideologies, violence and promoting fear about the destruction of Western culture.

McInnes in February filed a defamation lawsuit against the Southern Poverty Law Center’s description of the organization, a case that has yet to be decided.

At least one other hyper-partisan organization that tracks hate groups agrees with the SPLC. The Anti-Defamation League has said the Proud Boys has white supremacist ties and “is overtly Islamophobic and misogynistic.” 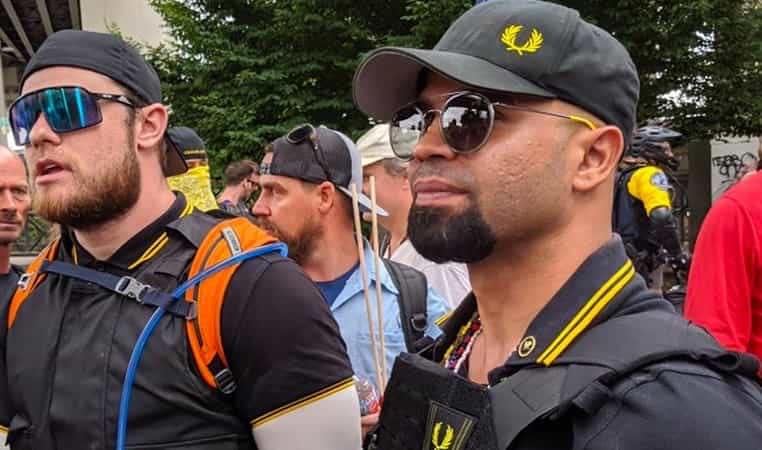 The brew pub’s owners were not aware until this past weekend that Jeffries was a congressional candidate, nor did they know that speakers would be present, Pasquini added.

It wasn’t until Jeffries’ campaign gave more details this past weekend — and complaints from locals flowed in about the Proud Boys chairman’s speaker role — that they decided to cancel the event.

The ideologies of such speakers were especially troublesome because of the establishment’s respect for Hershey’s immigrant community, Pasquini said.

Jeffries in a Monday statement said that he blamed the owners’ decision on threats he claimed they received.

However, Pasquini denied ever receiving threats. The business only received calls and emails from concerned locals, he said.