Football brothers LeRon and LeSean McCoy are renovating 1000 N. 6th St.—at the corner of Boas Street—into a five-unit, market-rate apartment building, with additional retail or community space.
They also have plans to purchase the Jackson Hotel and then build a new, larger, market-rate apartment building next to it at the corner of N. 6th and Herr streets.

“We looked around and decided to find a project that would be of benefit to both Harrisburg and ourselves,” he said, in a recent phone interview with theBurg magazine.

The 1000-block of N. 6th Street, looking west, with the Swallow Mansion to the left, and Jackson House on the right.

The brothers are Harrisburg natives who played football for Bishop McDevitt High School. LeRon, a retired wide receiver, played professionally for the Arizona Cardinals, San Francisco 49ers and Houston Texans, while LeSean, a former Philadelphia Eagle, is currently a running back for the Buffalo Bills.

LeRon McCoy said that building, also known as the Swallow Mansion and, later, the Curtis Funeral Home, is an investment for the pair.

“LeSean and I have a desire to develop in Harrisburg,” he said. “It’s something he’s been wanting to do for a long time.”

Last year, the circa-1896, corner building suffered a partial collapse, with bricks and debris spilling onto the sidewalk on the Boas Street side. The collapse seemed to prompt long-time owner, Annette Antoun, to finally part with the property.

Antoun bought it in 2000 from the Historic Harrisburg Association, believing it would become part of former Mayor Steve Reed’s plan to develop the block as an African-American history museum. However, that museum was never built and, over the years, the building remained boarded up and increasingly dilapidated.

LeRon said he expects the project to be completed by year-end.

The view of the block looking south, with the Jackson Hotel in the foreground

Right next door, at 1002 N. 6th St., a company called LBR Properties has begun to renovate that long-neglected building, which Antoun had owned for 35 years. The company is building out three apartments—two one-bedroom units and a “large studio”—as well as a small retail space on the first floor, according to co-owner Rami Rammouni.

Rammouni said that the block was ripe for redevelopment considering all the development in Midtown over the past decade, as well as its proximity to the Capitol complex.

“It’s positioned so well with the commonwealth right there,” he said.

Next to that building is the beloved burger and sandwich restaurant, the Jackson House, and next to that, at 1006 N. 6th St., sits the “Jackson Hotel,” a former hotel and boarding house that once catered to African-American patrons who were denied service in Harrisburg’s white-only hotels.

The Jackson Hotel has been empty and boarded up since long-time owner German Jackson died in 1998. In recent years, the building’s roof caved in, and the back of the building has collapsed.

When complete, the 3,420-square-foot building will consist of four apartments, with commercial space on the first floor, Long said. Notably, the large mural, which features African-American entertainers and historic figures, some of whom stayed at the hotel, will be preserved.

Long’s company is also performing the restoration work on the Swallow Mansion/Curtis Funeral Home for the McCoys. LeRon McCoy said that he hired Long after seeing the work his company did to rebuild another tumbledown structure—the long-dilapidated building at North and Susquehanna streets that soon will be the new home of Elementary Coffee Co.

McCoy said that he and his brother have an even grander vision for the block, which would result in dozens of new apartments.

They want to purchase the Jackson Hotel property from Long and then build a new, larger, market-rate apartment building next to it at the corner of N. 6th and Herr streets, property currently owned by Bethel AME Church. That lot has been empty since the church burned down in 1995.

McCoy said that they’re currently in talks to buy that property from the church.

“This is all part of a larger project we’re working on,” McCoy said. “We have a vision for that block.” 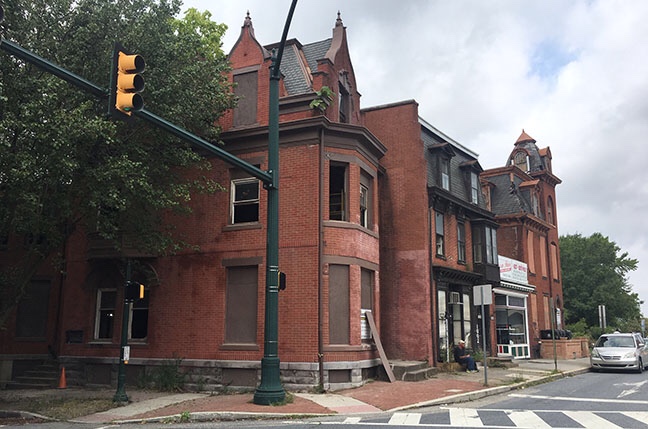 The 1000-block of N. 6th Street, looking north, with the Swallow Mansion in the foreground