In 1733 John Harris was bound to mulberry tree on Front Street, to be burned alive by Natives, but saved by Frank “Hercules”

Frank remembered when the Indian smoked his pipe and when the forest covered what is now the site of Harrisburg. He used to say he had ‘turned many a furrow between the Canal and the bridge across the river.’

Harrisburg, Pennsylvania – Upon news of his death, Frank (historically know by the nickname Hercules) was quoted in a Philadelphia newspaper column from 1790. According the the National Gazette:

Frank remembered when the Indian smoked his pipe and when the forest covered what is now the site of Harrisburg. He used to say he had ‘turned many a furrow between the Canal and the bridge across the river.’

In the year 1733, Frank (Hercules) was the African American slave who brought friendly Native Americans to the aid of John Harris, Sr., when he was tied to the now famous mulberry tree on Front Street, Harrisburg, Pennsylvania, where he was to be burned at the stake by a tribe of furious Indians.

According to legend, because Hercules could speak the Native language, he was able to negotiate the release of Harris, Sr., according to the book African American History of Harrisburg.

After saving the life of his Master, Hercules was freed as a slave, and he then began the free African American community of Harrisburg. Harris was so grateful that he granted Hercules his freedom and some land on which he could live after Harris’ death.

There were 10 slave holders in Harrisburg, and 80 slaveholders in Dauphin County, as recorded in the federal census of 1790. Burial sites of those African American slaves are located in the Paxton Presbyterian Church cemetery at 3500 Sharon Street in Paxtang, where they were members of the church.

33 years after the assassination attempt at the mulberry tree on Front Street, Harris’ son, John Harris Jr., build his mansion at the same location where it stands today.

Harris and his family were considered the principal store keepers on the American frontier; and at his house two notable “council fires” were held with the Indians of the Six Nations and other tribes. Harris Jr. officially founded Harrisburg in the year 1785. 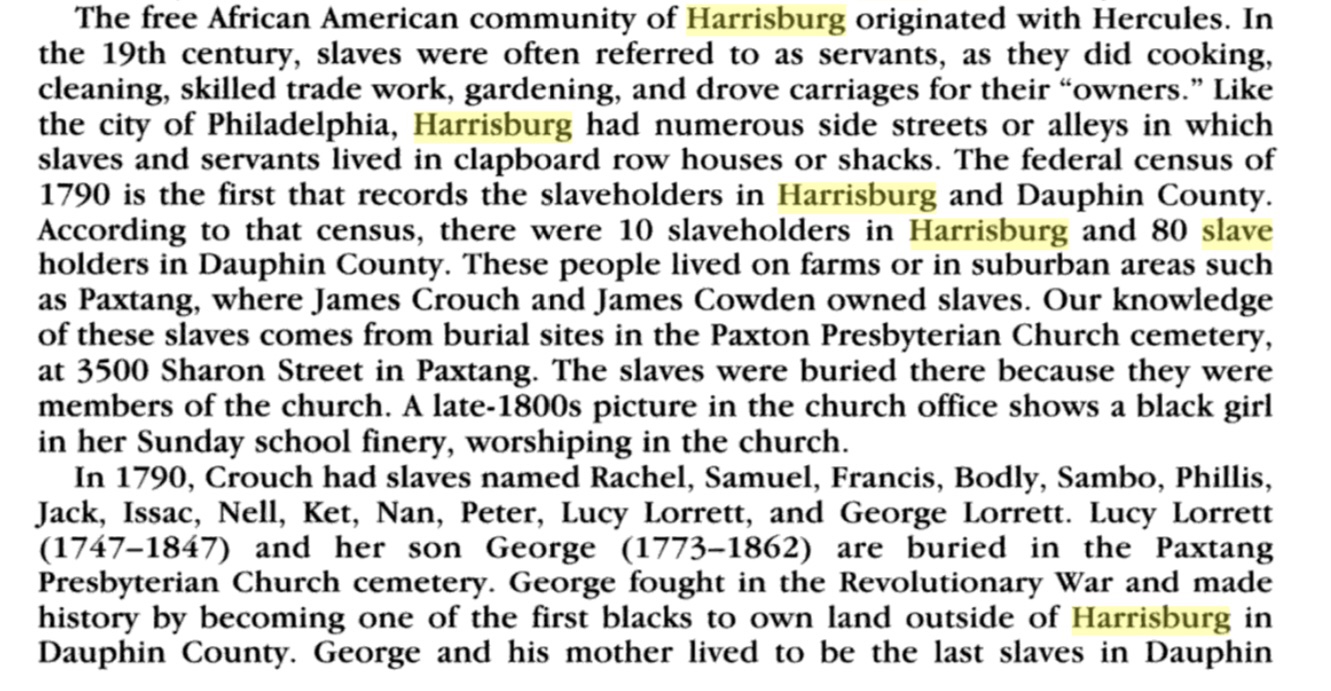 Coming Soon: The Story Of The Paxton Boys