Harrisburg, PA – Demographics are shifting rapidly in Pennsylvania. According to an in-depth analysis published by the Washington Post, over a 22-year period many locals districts have diversified the racial makeup of their student body.

In the Steelton-Highspire, and Susquehanna Township School Districts, another dramatic demographic shift occurred during the 22-year period. Not only did the Hispanic student enrollment increase significantly, the Black population did as well. But even more dramatic in these districts are the decrease in White student enrollment.

Asian, enrollments increased across the board as well, although to a much lesser degree than Hispanic. The category identified as Mixed-race saw population increases similar to the Asian enrollment numbers in many cases. 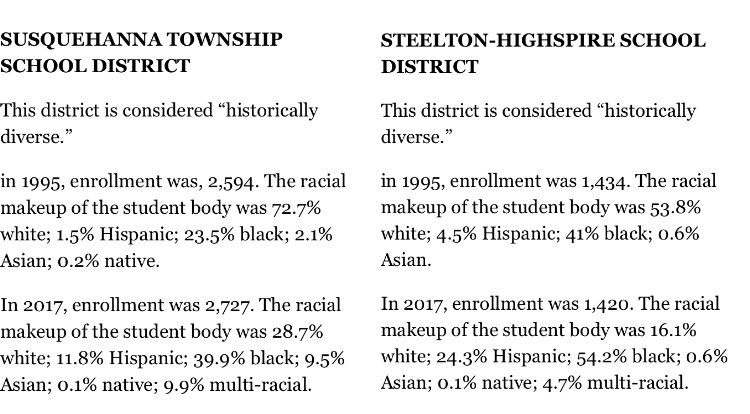 This national trend is not exclusive to Pennsylvania. As the nation becomes more racially diverse, so do its schools. Next year, in fact, the Census Bureau projects that children of color will outnumber white children in the U.S.

The Lancaster, York, and Lebanon School Districts all saw very significant increases in their Hispanic student populations. The Lancaster district had a large decrease in its White student enrollment. 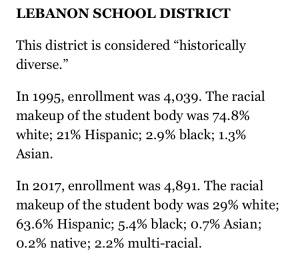 160,000 Puerto Ricans left the island after Hurricane Maria, with many of them relocating to Pennsylvania. The commonwealth now has the third largest community of Puerto Ricans who relocated after the hurricane after Florida and New York, and Puerto Ricans represent 49 percent of the state’s Latino population, the largest group.

Pennsylvania also is home to people from other parts of Latin America, including Mexico, Dominican Republic, Ecuador and other countries.

The Greater Philadelphia region has the second largest Hispanic population in the Northeast U.S.

The town of Reading has the most density of Latino population in Pennsylvania.

For U.S. Children, Minorities Will Be The Majority By 2020, Census Says – As reported by NPR