– Harrisburg span over Paxton Creek to be closed, detoured for up to 10 days.
– 12th Ward Polling Place being relocated to Laurel Towers

Harrisburg span over Paxton Creek to be closed, detoured for up to 10 days.

Director of Communications Joyce Davis from City of Harrisburg · 2d ago

Harrisburg, PA – The Pennsylvania Department of Transportation (PennDOT) today announced that its contractor will begin an accelerated project to remove and replace the existing Herr Street bridge over Paxton Creek in the City of Harrisburg on Friday, September 14, weather permitting, with work scheduled to be completed by mid-October. This work was originally scheduled for September 7-17’

This contract involves accelerated bridge construction techniques in which the contractor builds a new precast concrete superstructure in a nearby lot along Herr Street. Once the site is prepared, the contractor will remove the existing bridge, replace it with the new structure, and rebuild the roadway over a 10-day period. This option was selected to reduce traveler inconvenience by avoiding a lengthy bridge closure or a two-year project under phased construction.

PennDOT advises travelers that except for during the detour, the contractor will not restrict travel lanes between 6:00 AM and 8:30 AM, and between 3:30 PM and 7:00 PM. Also, no lane closures are permitted during the Labor Day holiday, August 31 at 6:00 AM through September 4 at 9:00 PM.

Nighttime roadway preparations began August 13. PennDOT advises travelers that they may continue to encounter single-lane restrictions with flaggers directing traffic through the work zone weeknights between 7:00 PM and 6:00 AM for the next two weeks as crews prepare the location for removal and replacement of the bridge.

PennDOT awarded the $3,127,043 design-build contract to J.D. Eckman, Inc., of Atglen, Chester County, in which the contractor has been responsible for some of the design requirements for the removal of the existing 98-year-old single-span steel thru-girder bridge and construction of a new precast concrete bridge superstructure, utility coordination, roadway reconstruction, and new signs and pavement markings.

This portion of Herr Street, officially designated as State Route 3018, averages more than 12,345 vehicles traveled daily. To avoid delays, travelers should allow for additional time in their plans or seek an alternate route.

Is the 12th Ward Polling Place being relocated to Laurel Towers?

The last day for hearing of objections: September 5, 2018 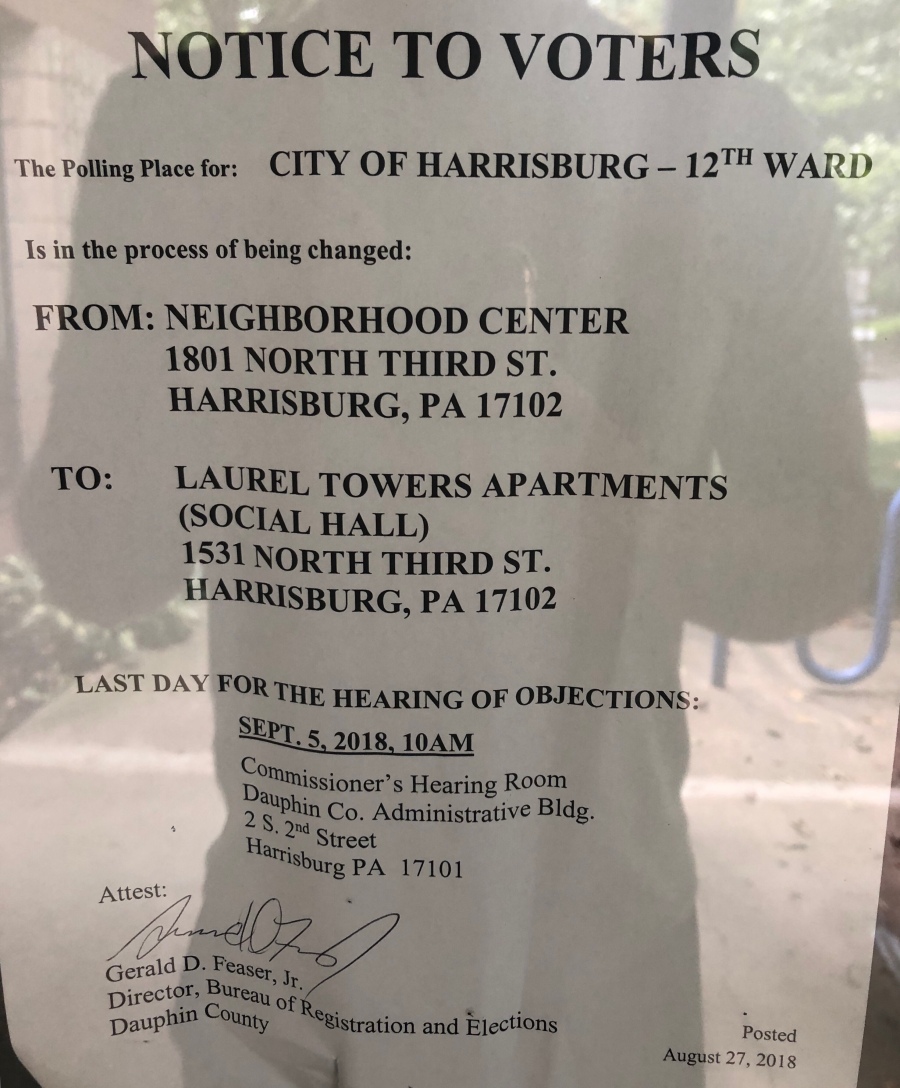 Posted on the door of the Neighborhood Center at 3rd & Kelker St.

The Bureau is accepting public comment but I don’t know what the comments cutoff date is nor did I pay attention to the notice posting date. Once the change is officially enacted I believe the Bureau will notify 12th ward registered voters by mail. Just wanted to give a “heads up”.

One commenter replied to the original post and wrote: “I hope this isn’t a cheesy tactic to marginalize voters and voting in this ward in the November elections. Such a change should not occur 2 months from the 11-6 election, IMO.

My recommendation is to leave the ward polling location as-is and if changes MUST (rationale for this is whaaaaat?!) be made, do so on an off-year with a LOT of notices to ward voters.”

A second commenter said: “It would be nice to have official information and some type of explanation about this.

I wonder if the move is related to Election Day shenanigans from last year..”

Another commenter mentioned: “It could be because the 11th and 12th wards were too big and needed to split.”

The original posters then added: “Another consideration may be that both wards were cramped into the small front room the past few elections. When I worked at the polls there last November I seem to recall the Elections Bureau director mentioning they would be looking for a place to relieve the crowding.”

The first commenter followed up by saying: “Is this related to ADA compliance issue, per April press release from county? If so, curious about what was inaccessible…”