The Codes Department: Friend or Foe? By: Beau Brown

The Codes Department: Friend or Foe?

Despite the controversy this opinion may cause, it will pale in comparison to the thousands of entrepreneurs and regular renovators that need their voices heard.

What I am about to say does not apply to every codes department in every municipality. It is also not a personal attack on any individual. At my own risk of bureaucratic rebuttal, I’ll say what needs to be said. 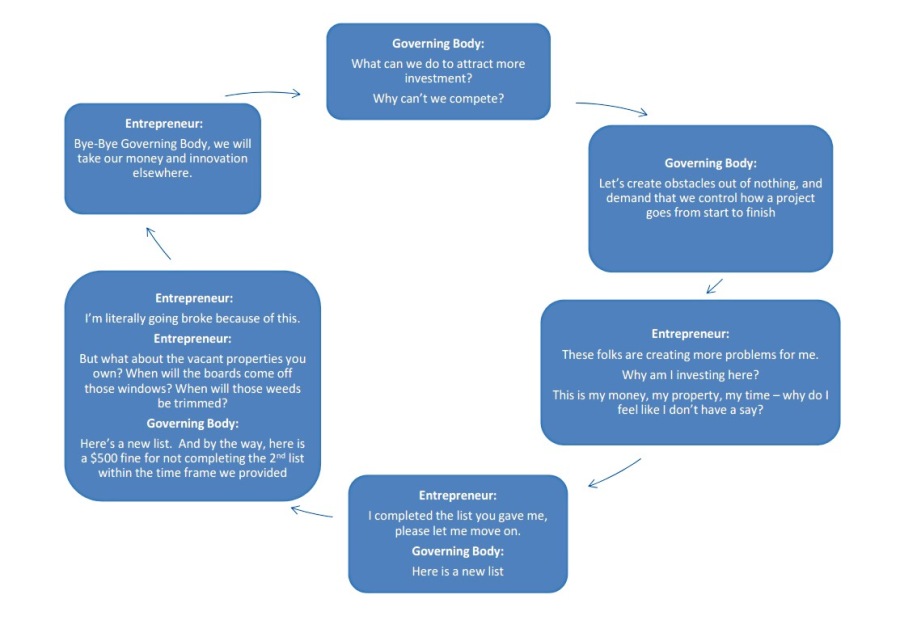 There is an eggshell relationship that exists between codes departments’ state wide, and an enterprising citizenry that must be acknowledged.

If local government officials are reading this, and behind closed doors want to know how to attract more innovation to their town, I’d start with the consumer confidence index.

I’d estimate that the code office represents about 50% of a municipality’s projection, or erosion of consumer confidence. Consumers being: homeowners, business owners, developers, or contractors.

I’ve traveled all over the state as a commercial real estate broker, making friends out of customers and clients, listening to gut-wrenching stories, and bearing witness to people unnecessarily losing thousands of hard earned dollars. In some cases, by the stroke of an officiated pen – their American dream.

Some actions could be construed as fraudulent. If not criminally, at least morally, and the consequences many times is the continuation of vacancy and blight, as quality renovators are equalized with poor renovators, and are chased away. It’s a hard truth to swallow.

Let’s do some Q&A

• If one individual has a difficult and unnecessary experience with the codes department, how likely would they tell anyone and everyone that listens? Very likely.

• If their story makes it to the media, how likely would the viewing audience rush to invest in your town? Unlikely.

• Do you agree that if a new construction project, major renovation, or small improvement is planned and performed that it should be held to a strict standard of safety? I absolutely do.

• Do you believe going forward, new safety code regulations are most likely in the best interest of our nation’s infrastructural future? I certainly hope so.

• Do you believe that a contractor, entrepreneur or homeowner should bypass, or be lazy in their efforts to meet safety requirements? I do not.

• Do you believe that if the code office disagrees with an individual or business personally or politically, or there is a conflict of interest, manufactured obstacles that make no sense are allowed to prevent progress? I hope you don’t.

• Do you believe that a code officer, who knows they can get away with such obstacles, should be allowed to serve the community? I don’t.

Think of fire. It can cook your food or scald your hand. It can heat your home, or burn down a town.

I’d like to offer an idea that could forever change the way these offices work:

As a model of oversight, its purpose would be to act as a supporting body for entrepreneurs and regular people to go to as a last resort when they have evidence of a code office playing out of bounds.

Those who would need this committee may have provable legal cases, but either lack funds for an attorney, can’t find an attorney willing to fight city hall, or just plain have an attitude of dissent in the face of codified overreach.

With that attitude, they righteously fight the power, only to have more obstacles placed in their way as payback.

By virtue of its founding purpose, this committee could then:

1) Verify the petitioner complies with all safety standards, and is not cutting corners.

2) Privately meet, or call public attention to the office causing issue in pursuit of a remedy

3) Demand relief based on facts and principles.

Relief would most likely be granted, because if this trend setting body was formed in real life, you can also expect a cash swollen legal defense fund right along with it.

If senselessness produces punishment, then reason will produce defiance.

The municipalities shouldn’t object to this idea, unless of course they object to Abraham Lincoln, who famously said that this is a nation of the people, by the people and for the people.

We the people own every single codes office in existence. While we respect the need for safety and standards, and encourage it thoroughly, we object to selective punishment and ridiculous red tape

What some may not believe, but I know thousands instantly will – is that this committee would be overwhelmed within its first month of operation.