HRA initiated neighborhood rezoning which created land use restrictions, increased taxes, and other financial burdens, with the end goal to eventually take over real estate parcels at a fraction of market value through tax sales using straw buyers.

Harrisburg, PA – A lawsuit filed in the United States District Court for the Middle District of Pennsylvania alleges that City of Harrisburg, and Dauphin County officials illegally coordinated a real estate scheme for their personal enrichment.

Several high profile figures are named in the lawsuit including Harrisburg Mayor Eric Papenfuse, and his former senior advisor Karl Singleton. The plaintiffs claim that the defendants targeted private property owners as part of a coordinated insider real estate scheme.

Serious accusations are described within the details of the lawsuit that involve physical threats of violence, property damage, weaponizing the codes enforcement department, and misuse of city resources to target citizens’ livelihood, and to suppress the rights of the plaintiff.

In 2017 the city attempted to threaten and intimidate the plaintiff during a face to face confrontation that transpired in downtown Harrisburg. Physical threats were made to the plaintiff by senior advisor Singleton. “I know where you live, I can have you taken out,” Singleton said.

After initial attempts by the city to stonewall the police response and investigation, the plaintiff soon filed a civil lawsuit. Singleton was eventually found guilty and removed from his position in the city government.

As for the graft of the real estate scheme, the plaintiff contends that Mayor Papenfuse used Rebirth, LLC, as a dummy corporation with no true purpose other than to move real estate from government ledgers for personal gain, while simultaneously using funds from the city, at his direction as Mayor, to demolish [condemned] structures in an effort to relieve personal financial burden.

The federal lawsuit alleges that an employee of Mayor Papenfuse’s bookstore was connected to Rebirth, LLC, the illegal straw buyer of parcels on Rudy Road in Central Allison Hill.

A private investigation revealed that the relative of Papenfuse’s employee resided at the same address listed in the corporate filings of the Rebirth, LLC entity.

Siam Rose and Brian Clough allegedly conducted the Rudy Road straw purchases through the fictitious title of Rebirth, LLC, as advised by Papenfuse, who employed Kevin McClaire, an individual residing at the same address as Siam Rose.

Coincidentally, media reports were previously circulated about another pair of employees at Papenfuse’s Midtown Scholar bookstore who together were wanted for murder.

Specifically to block the plaintiff, and to ensure future control of the Rudy Road parcels, Rebirth, LLC, was allegedly used to swipe away the properties that the plaintiff had successfully bid and rightfully purchased at judicial sale. The city egregiously overreached its authority when they illegally denied the title, and instead granted ownership to Rebirth, LLC.

The plaintiff contends that this is an insider trading scheme, and works in conjunction with the efforts of the city to push him out of the neighborhood, and then take over his building, which is a highly sought after location by the city.

The location of the plaintiff’s property at 333 S. 18th Street, adjacent to the Rudy Road properties, is strategically important for Capital Region Water’s storm water and sewage system upgrades.

Likewise, this set of properties is a key location needed for the proposal of the comprehensive plan to generate federal grant money and public contracts.

The plaintiff believes that the scheme was executed under the guise of being in the public’s best interest as a “plan developed by the people,” and for that purpose it was intentionally worked into the city’s failed comprehensive plan, in the section called Meander Park in the proposal. 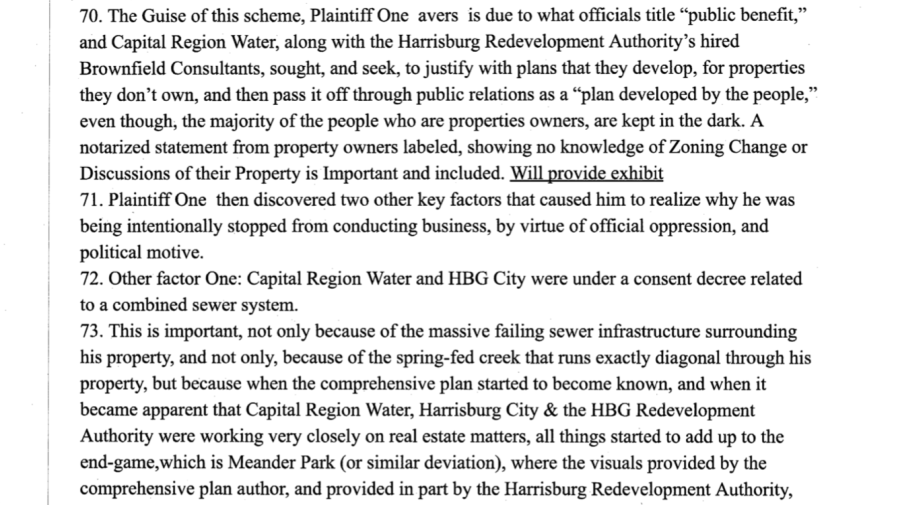 Another facet of the scheme intended to put pressure on the property owners using codes enforcement officers.

The lawsuit also implicates city and county officials who made strategic zoning changes as a tool to devalue select real estate parcels, and used other public departments to target private property owners. Harrisburg Redevelopment Authority coordinated much of this activity.

HRA initiated neighborhood rezoning which created land use restrictions, increased taxes, and other financial burdens, with the end goal to eventually take over real estate parcels at a fraction of market value through tax sales using straw buyers.

This scenario would create a situation where cronies of the city could gain millions in Federal grant money as part of a proposed “Meander Park,” and ensure big public contracts for CREDC. 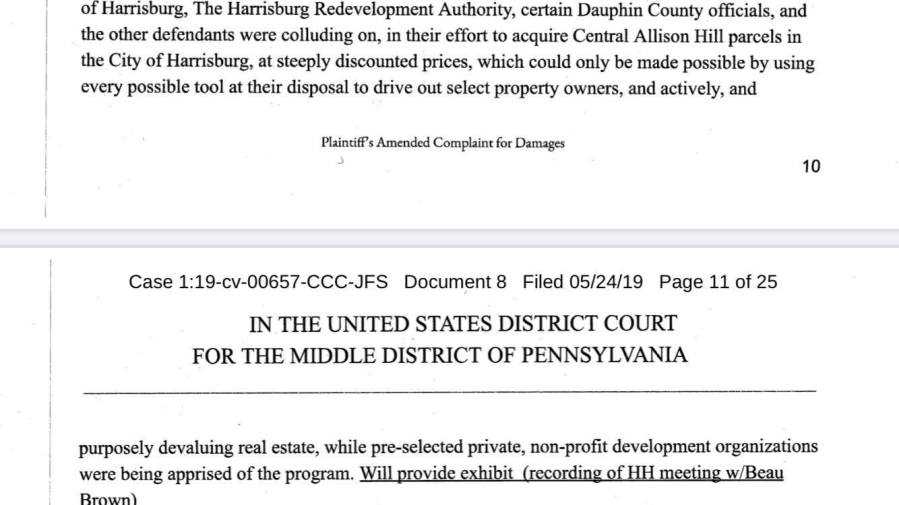 *This report has been updated to include the lawsuit docket number 1:19-cv-00657-CCC-JFS, and for correction to clarify that the McClaire’s are not known to be advisers to purchase, but are connected to Papenfuse.