Jenkins did well on all questions, and to be specific on the primary topics of crime, finance, and the truth about Act47 she went unchallenged. She mentioned again the fact that she will be working on re-acquiring the parking due to the inadequacy of the deal.

Harrisburg, PA – This evening at the Harrisburg Area Community College Midtown campus in Harrisburg, Pennsylvania, the Democratic candidates squared up for the Mayoral Debate. Of the many topics, candidates debated on how to deal with exiting ACT 47, and potential Home Rule. 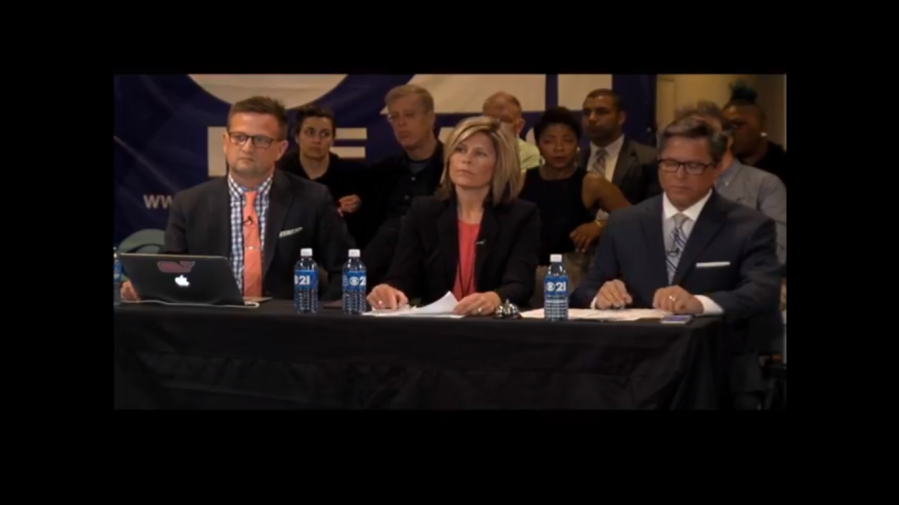 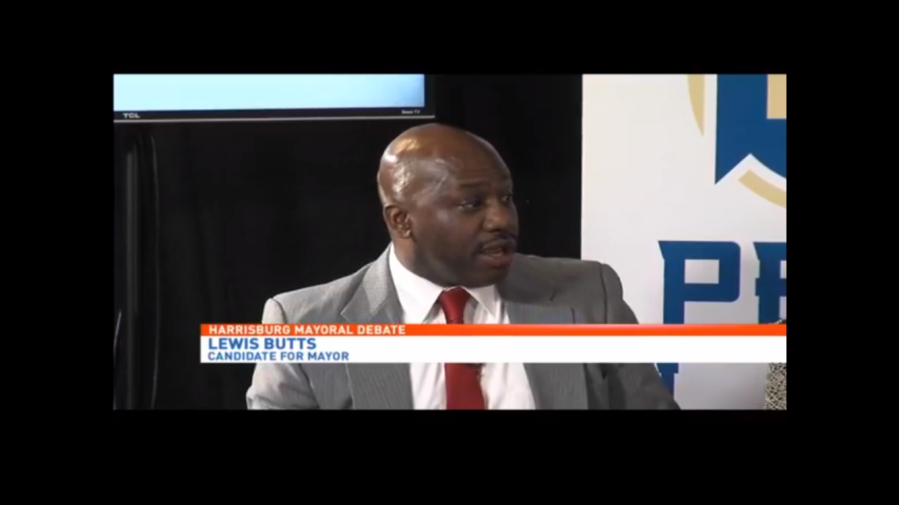 If elected as Mayor, candidate Lewis Butts‘ first move will be to “bring in Gloria Martin-Roberts” as his Personal Assistant. This remark drew a big laugh from the crowd. “She can have anything she wants.”

Butts is listed #1 on the election ballot. He covered a lot of territory, most of which he refers to from his comprehensive plan, one that he boasts as the only completed comprehensive plan for the city. Butts explained more detail and benefits of his proposed hydro-electricity dam, that he says will be funded by Voith Hydro in York. He also covered the benefits of his city-wide Wifi-program.

I won’t bother to mention this guy because Pennlive will write 25 columns about him in the next 2 weeks. One thing of note that he did mention was how Lewis Butts has a good plan to enlist a Police Academy into the Harrisburg High School.

At the height of the debate, the moderators sunk in deep on candidate Gloria Martin-Roberts’ questionable associations with former Mayor Linda Thompson, and with her current campaign Treasure, James Ellison.

It has also been reported that Martin-Roberts has been endorsed by former Mayor Steve Reed.

In addition to Reed, one of Martin-Roberts’ campaign advisers, James Ellison, a local attorney, also has been controversial. He was investigated for alleged over-billing at a school district and chaired the former Harrisburg Authority that financed millions of dollars of incinerator-related debt.

Papenfuse said the support of Ellison and Reed behind Martin-Roberts represents the city’s old guard trying to regain power again.

“The old Harrisburg political machines have all circled around Gloria Martin-Roberts,” he said. “That’s what got the city into trouble in the first place. They all want back in.” – Pennlive 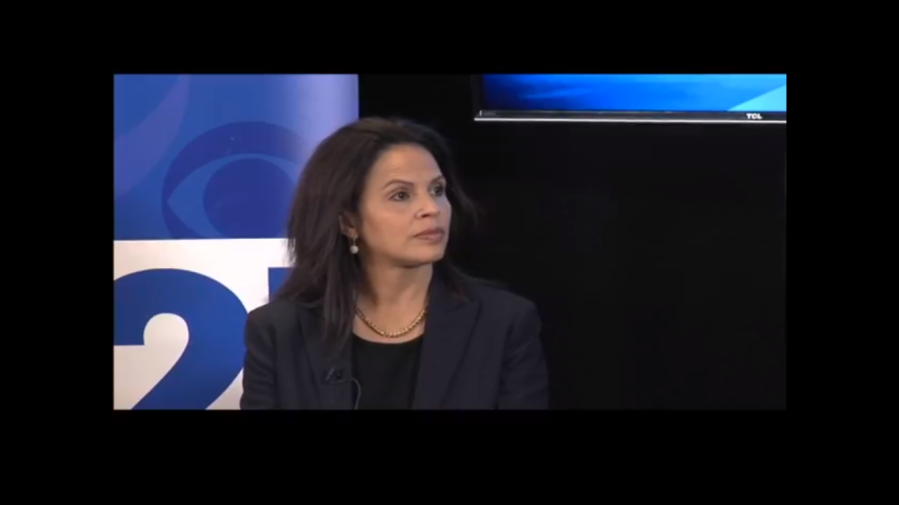 Jennie Jenkins was strong on her crime knowledge and the downfalls of the insufficient computer system that the police depend on. She was vocal on her bid to fight crime, blight and trash. In the lightning round, she received a full round of applause for her comment about changes made by Papenfuse, “We should have listened Dan Miller.”

Jenkins did well on all questions, and to be specific on the primary topics of crime, finance and the truth about Act47 she went unchallenged. She mentioned again the fact that she will be working on re-acquiring the parking due to the inadequacy of the deal and the now, junk bond status of the bonds. She said “There is no way the deal lasts another 37 years.”

The moderators did press Jenkins on her previous tribulations while working for the police department. Due to the current legal status of the her case, she is not able to disclose all of the information at this time, but thus far her outcomes from the courtroom have vindicated her innocence. In her hand, Jenkins sat prepared with the transcripts from court that were intended to shut down the idea that she stole any money. That was not the outcome of those charges.

It was a great community turnout on this 2nd day of May, 2017, and the moderators asked a variety of great questions on ACT 47, Home Rule, residency requirements for police and so much more that will be discussed in follow-up reports. 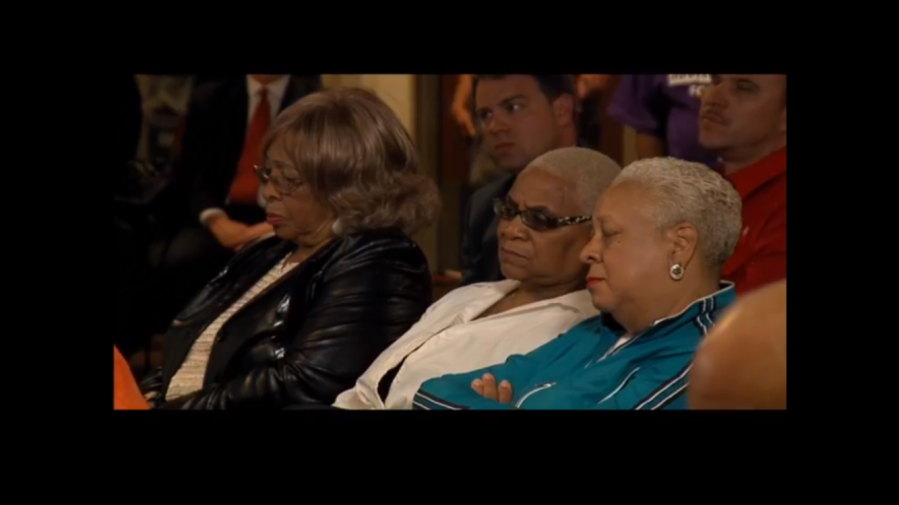 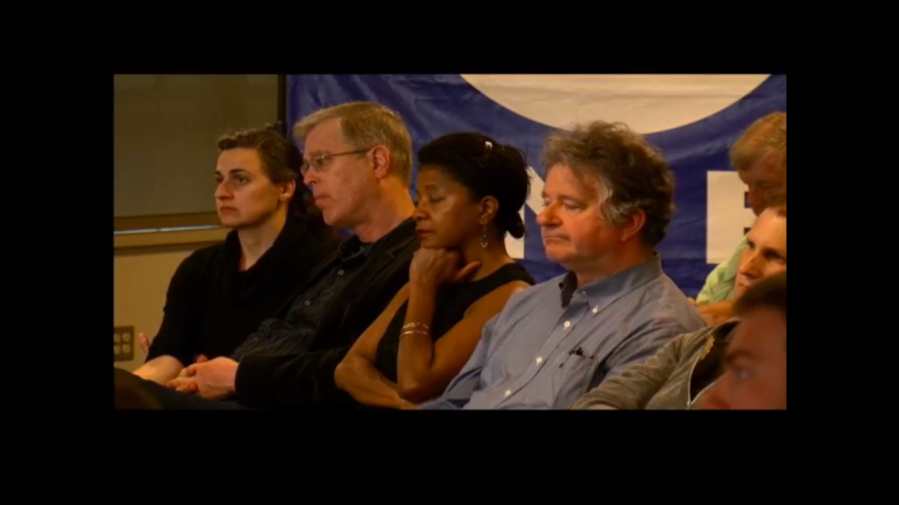 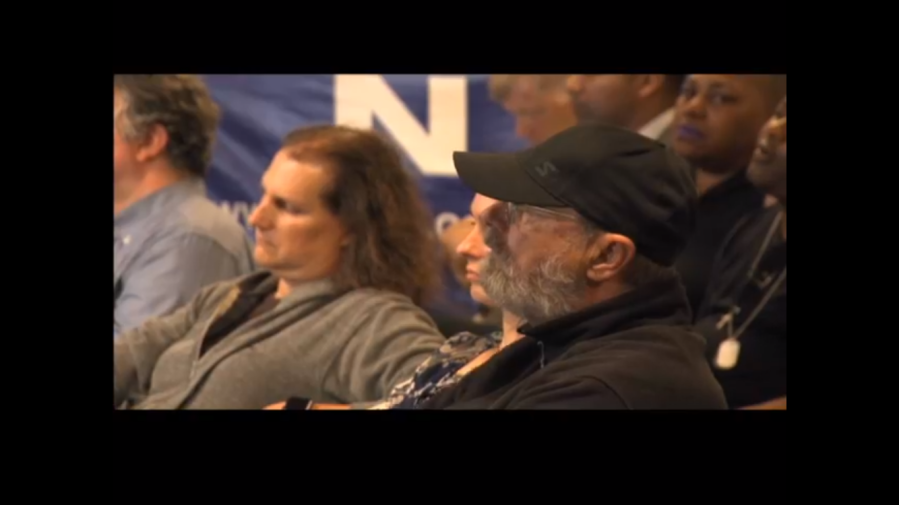 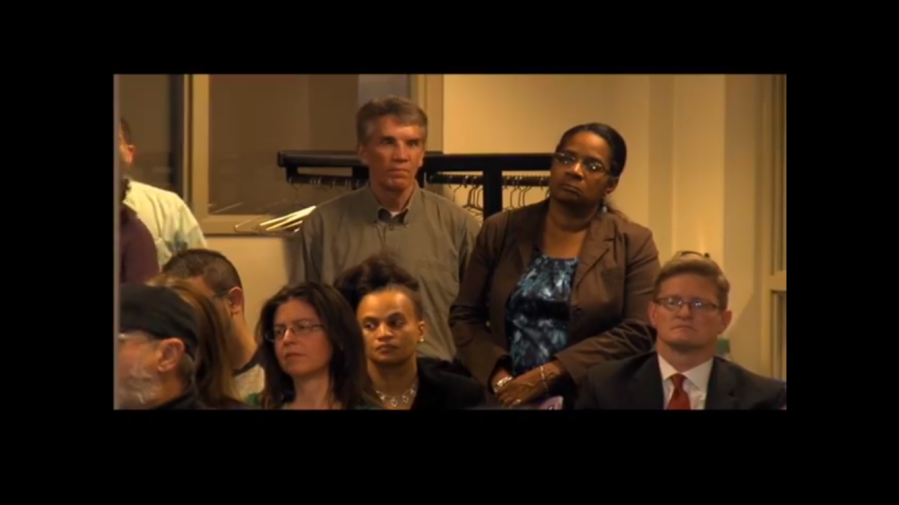 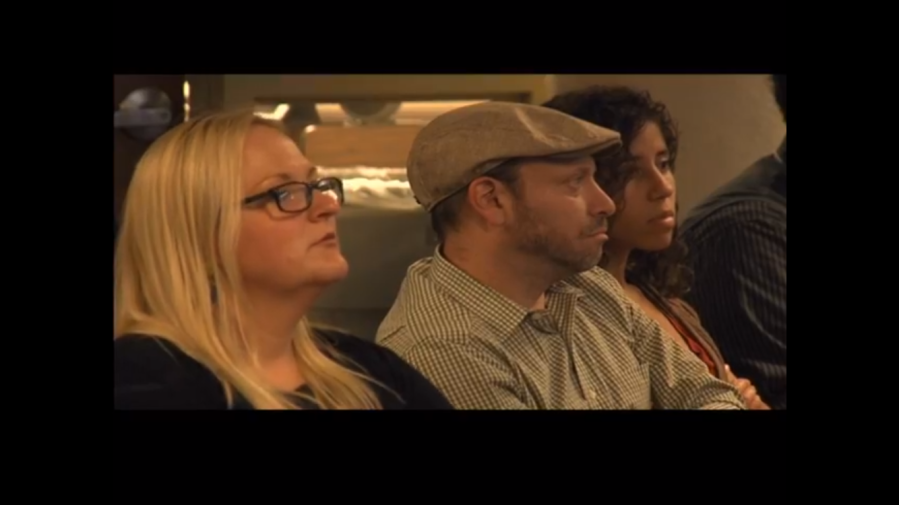 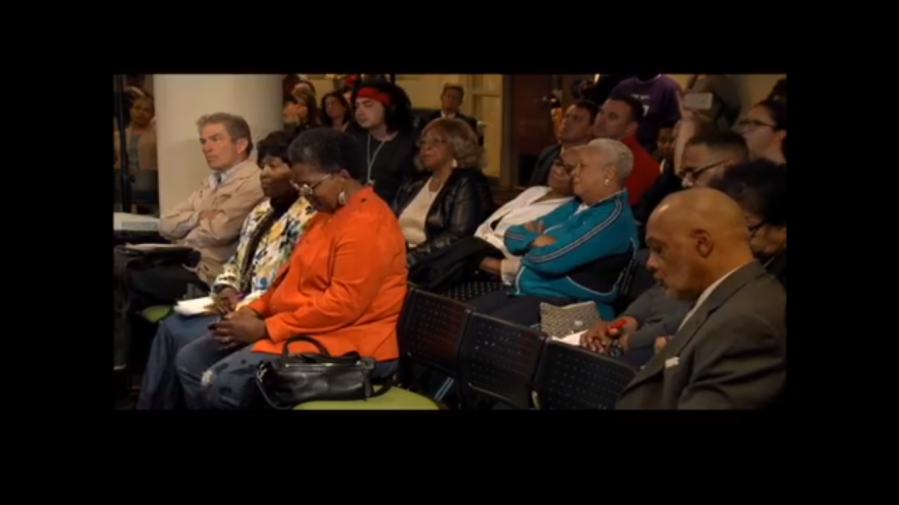 I was personally moved by the political newcomer, Anthony Harrell‘s speech on unity for the city as all of us being equal as American. “We keep forgetting that we are all American patriots.” He continues, “As a soldier we speak that we are all as one.” Harrell continues “And we all have one common goal in Harrisburg, to make it all great.”

In the closing minutes of the debate, Chris Siennick stole the show when he crashed the party, with his skateboard in hand to announce his Independent campaign for Harrisburg Mayor in the November election. At this point the entire crowd was shocked and broke out in full laughter.

“I’m the youngest candidate, so if you want to help get young people in power, vote for me in November.”

His was quickly removed from the stage with little resistance. 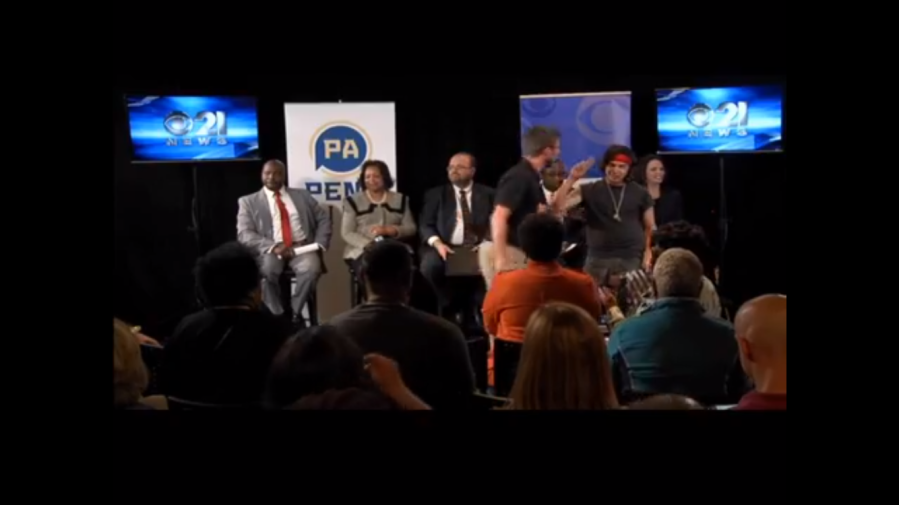 Moderator: “SIR, Your wasting value time that the candidates need..” 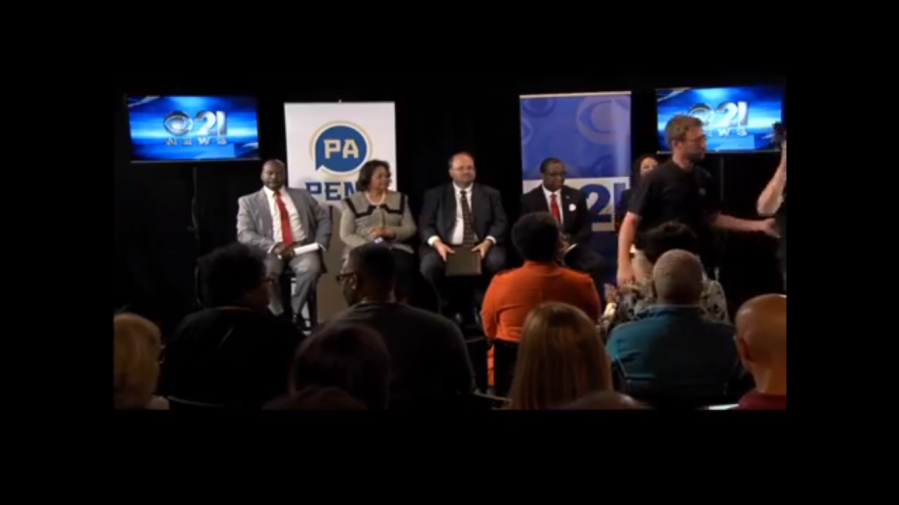 Here is the debate video